This week we were down a few boys and the fog and clouds were rolling in.  No longer did it feel like a hot and sunny day.  It officially was fall.

With the threat of impending rain, the boys decided that they wanted to make a shelter structure.  We first scouted around to make sure we had a good spot to setup.  The boys came back to the first spot they had found after they determined that it was flat enough, protected from the elements, had enough materials to build with and also safe from “widow maker” branches and trees that could drop on us. 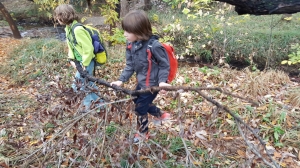 Once they had there spot everyone got to work dragging branches, clearing space and building a lean to structure. 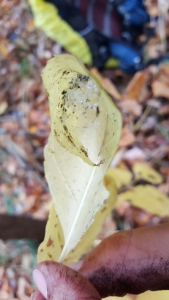 While Wendell was looking for materials he found a leaf still on the tree, but curled over itself like a taco with some fuzzy, silky, web-like material in the middle studded with tiny black dots. It was a fun fall nature mystery, do you have an ideas what it could be?

After a particularly large branch was picked up off the ground, we noticed a beautiful and unusually large yellow jacket crawling along the ground. Because of how cold it was, we all got to watch this gorgeous creature up close and personal! This was very edgy for some of the kids, and a good opportunity to show that nature is not inherently out to get us. Some of us wondered if it was a new queen looking for a spot to overwinter, similar to the way thier more docile cousin the bumblebee operates. After spending some time checking her out, we set he in a safe place out of our way and go back to work!

The boys ended up with a pretty cool structure that was naturally camoflauged into the landscape and everyone could fit inside. We were not sure that it would quite be enough to sleep in on a rainy night, but it sure makes a great fort to play in after school!

To close the day, we played several rounds of that old favorite game, Firekeeper! It sure felt like a full day. I hope we have everyone back this week to show them what we did!

← WEEKS 4 & 5: Working Together as a Clan
Week Five: Nature Names and Awareness →